Anjali’s story is full of sadness, however because of our incredible Cure One supporters her life can be completely transformed.

Anjali begins her Cure One journey

Anjali, 15, is from Bihar, north east India. In 2014, she felt tingling and pain in her left hand and a numb patch appeared on her left elbow. One day in school she touched a finger, and did not feel anything.

She kept this a secret.

“School was hard because I couldn’t hold a pen. It became more and more difficult,” she reflects.

Then disaster struck. In Bihar the winters are very severe, with temperatures dropping to freezing and the only source of heat is often just a small fire. One morning Anjali got out of bed, washed herself, and went to dry her hands and feet by the fire. After she had been sitting there for some time she was horrified to see that both her feet were covered in blisters. They were very badly burned and she hadn’t felt a thing!

Her family rushed her to the local hospital but the staff there realised she had leprosy, so they would not treat her.

They sent her away and told her family that only the Leprosy Mission’s Muzaffarpur hospital would help her. Poor Anjali had terrible open sores on her feet at this point and her family had to make the two hour journey on public transport to reach Muzaffarpur. Her feet were becoming infected, however they had no choice but to get her there.

When they arrived at the hospital the doctors immediately cleaned and dressed her wounds. She needed to stay in hospital for several months while her feet healed. This is because she won’t feel if they become injured again which could lead to infection and possibly amputation.

Anjali will have her wounds dressed everyday to prevent infection.

Anjali recounts the day she arrived at Muzaffarpur. “My mother and father started crying. And then I started crying. I felt very bad about this sickness. I didn’t know what leprosy was, just that it was a terrible disease.” 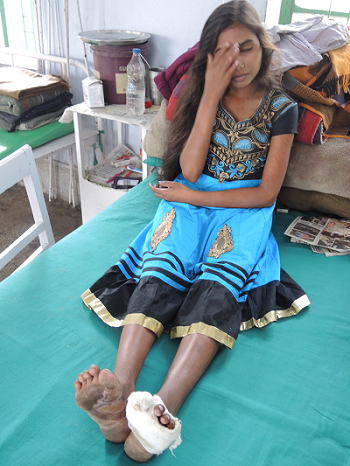 While she is in hospital she will be given multi-drug therapy, the cure for leprosy, and she will be taught physiotherapy as her hand has become clawed.

Anjali’s story is full of sadness, however, because of our incredible Cure One supporters, her life can be completely transformed. She will be cured, cared for, and restored. We will keep you updated with her progress in our inTouch magazines.

Together we can take the sadness out of Anjali's life.