On Tuesday 31st May, as part of the International Assembly, Mr Mainudin Dafali, from Nepal, and Mr Anjan Dey, from India, were awarded the 2011 Wellesley Bailey Award. This award honours people who have faced significant challenges in their lives from the consequences of leprosy, and have made significant contributions to their community and society. The awardees were presented with a framed citation of their achievements and a commemorative plaque by TLMI Chairman David Parry, as well as given a cash prize. 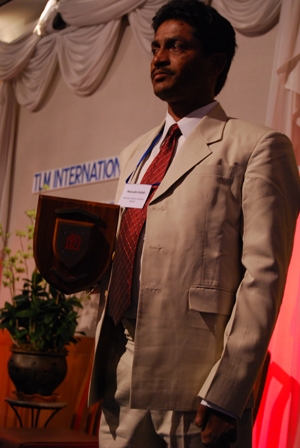 Mr Mainudin Dafali worked in the fields as a child for a small income to support himself and his mother, who suffered from leprosy. Then at the age of 10, he too was diagnosed with leprosy. His boss told him to leave, and that same year his mother died. Although a local woman took him in, he knew little of self-care, and developed a life-threatening foot ulcer. He went to Lalgadh Leprosy Services Centre who tried to save his foot but had to amputate.

Although it was difficult to find work, Mr Mainudin nevertheless started feeling hope as he was taught to look after his foot and hands and prevent further injury - the leprosy no longer controlled him. He was made facilitator of a self-care group, and motivated the others in the group not only to adhere to self-care but to develop activities that benefitted the community as a whole.

In the last ten years, Mainudin's group has grown to 75 people or more. Not only have they worked to improve the lives of the members, through education, housing, small business help and identification cards for government assistance; they have also benefitted the community, through improved village sanitation, education, health and co-operative farming. Through these activities, the group have reduced the stigma of leprosy in one of its most endemic areas in Nepal. People no longer see them as cursed, they have proved themselves agents for positive change in the community and consequently desirable people to be living amongst. Recently Mainudin encouraged groups to celebrate World Leprosy Day and organised many leprosy-affected people to give blood to the Red Cross.

Mainudin's story is impressive - he refused to let his past dictate his future. He did not dwell on the hurtful treatment he'd received from neighbours and friends. He didn't become angry and fearful. Instead he courageously sought to change the community that had rejected him, becoming a force for good. His attitude, determination and strong sense of civic duty make him a worthy winner of the 2011 Wellesley Bailey award. 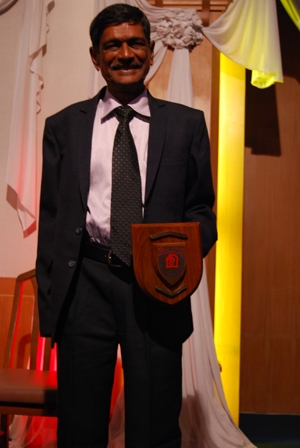 Mr Anjan Dey from India was an A grade high school student who won a scholarship to study engineering. Then when he was diagnosed with leprosy, he found himself suddenly unwelcome in his comfortable middle class community, and had no choice but to leave. He was twenty when he arrived at what is now known as Dr Bandorwalla Leprosy Hospital. He was deeply moved by what he witnessed there. Many of the patients around him were severely disabled through the effects of leprosy, and the restrictions on movement they suffered made it very difficult for them to live independently.

After being cured, Anjan Dey studied at Christian Medical College in Vellore, Tamil Nadu, and qualified as a physiotherapist. He worked full-time at Dr Bandorwalla Leprosy Hospital, bringing relief and encouragement to hundreds through rehabilitation. Utilising his academic abilities, he completed the certified course 'Feet in Leprosy' and started manufacturing hand and foot splints to help people with disabilities to perform daily tasks with relative ease. While working on ways to improve the lives of those disabled by leprosy, Anjan Dey wrote research papers on his methods, and has worked on 3 national and international research projects, including one at Queen Margaret's College, Edinburgh, on the concept of healing ulcers. He is now an internationally recognised and respected speaker and researcher, with four well-known publications to his credit on the subject of post-leprosy care and rehabilitation of leprosy-affected people.

Anjan Dey overcame the disappointment of not being able to study engineering, and put his energy and skills into serving those for whom leprosy had brought debilitation and limited mobility. He has played a significant role in integrating leprosy-affected people into mainstream society and in improving the availability of resources for leprosy-disabled people. His achievements in these areas make him a worthy winner of the 2011 Wellesley Bailey award.