Five Youth Advocate Scholarship recipients visited Nepal in early 2011 to witness the Leprosy Mission in action, and to learn about the medical, social and psychological impacts of leprosy.

At Anandaban Hospital, the Youth Advocates had the opportunity to meet people who were at different stages in their leprosy management, from those who had been recently diagnosed, to people under multidrug therapy treatment, to those who were being fitted for prosthetics or mobility aids.

At the city clinic in Patan, the group learnt about the Out Patients Clinic for diagnosis and treatment as well as the Community Rehabilitation Programme. 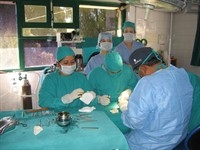 The Out-Patients Clinic is run weekly with the aim of reaching out to the wider community to educate and raise awareness of leprosy and what treatment is available. The Youth Advocates especially enjoyed getting out to the rural areas of Kathmandu and interacting with members of self-help groups whose lives had changed dramatically with support from the Leprosy Mission.

On the weekend trek through Kathmandu Valley, the group members were able to discuss and reflect on their experiences. Stacey explained that the first leprosy-affected person she met in the hospital left a lasting impression on her. "He had his cap covering his face and was looking down. When I asked the doctor why that was, he said this man was deeply depressed and ashamed of his condition.

"I was so impressed to see that money raised in New Zealand was going straight to the Mission's work and wasn't being wasted on unnecessary things."

"Every Leprosy Mission worker we met was extremely generous, humble and dedicated to the lives of the families and communities they work with. It was hugely encouraging to see their kind of spirit and perseverance despite the many difficulties they face."

"I was really impressed that the Leprosy Mission takes an holistic approach to helping people affected by leprosy and provides them with so much support and so many opportunities. If the Leprosy Mission didn't exist, how would leprosy-affected people cope?"

"I was really amazed by the self-help groups for families affected by leprosy. They are such a vital part of life as they provide opportunities for entire families to become independent, provide for themselves, and lift themselves out of poverty."

"I was amazed at how God is using the Leprosy Mission to restore so much hope and dignity in the lives of people affected by leprosy." 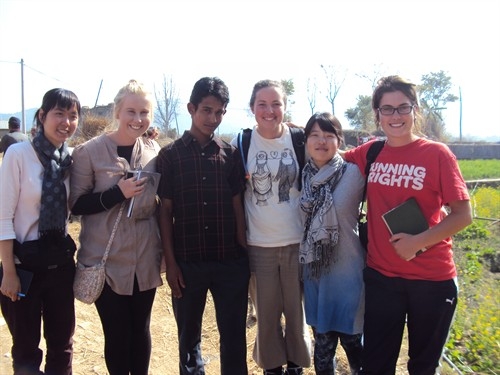 Abigail, Vicky, Eve, Yeri and Stacey with Sunil at a self-help group in rural Kathmandu