Reaching out to Southern China

One initiative from the team's Lucy Xia has been the development of a Chinese language moneybox for distribution in retail shops. The Chinese moneybox was designed by another volunteer, Lillian Xu, who is a third-year graphic design student at Auckland University of Technology. The funds raised from the new Chinese moneybox will support the projects in leprosy-affected communities in Southern China.

Lucy has already distributed some moneyboxes close to the Mission's office in Dominion Road, Auckland where there is a concentration of Asian retailers. This initiative has successfully raised over $300 in just a few short months. Lucy will now coordinate the Ethnic Communities volunteer team to distribute moneyboxes in other areas of Auckland that have a similar cultural mix.

Lucy is encouraged by the success to date and the backing from a special Leprosy Mission New Zealand supporter, "My thanks go to one kind supporter in Auckland, who primarily funded the printing of 1,000 Chinese moneyboxes. It is great to be part of such a committed passionate team of volunteers and we cannot wait to get these moneyboxes out in the community to raise awareness and funds for the Leprosy Mission's work in China," she says. 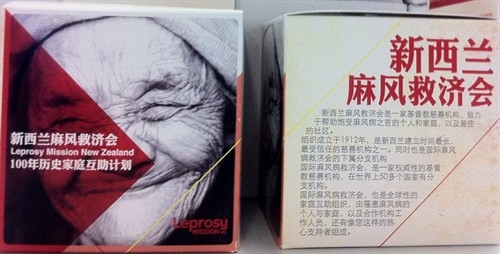