The Power of Family

Today, approximately 720 people will be newly diagnosed with leprosy. This figure may seem paltry when we consider that 25,000 children die every single day from preventable causes, or that nearly 3 billion people have less than $2 a day to survive on.

But the reality is, for every one person who is diagnosed, an entire family suffers - parents, children, siblings, aunts, uncles, cousins and grandparents - meaning that thousands of people are affected by leprosy and its consequences every day.

To make matters worse, in almost every country that we work, stigma towards leprosy-affected people and their families still exists. It stems from superstitions, religious beliefs, attitudes to physical disfigurement and discriminatory laws and practices. In fact, sometimes it can be even worse than the disease itself. People affected by leprosy are often rejected by their own families once the signs of the disease appear. They are forced to leave their homes and live in hospitals, leprosy-affected communities and sometimes on the streets. Families affected by leprosy are discriminated against within their communities - shut out from their workplaces, their schools, and their churches. 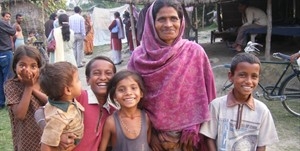 When Mohanta told her husband she had leprosy, he was angry. He didn't know much about the disease but believed it was something to be feared, something that could bring shame on him and his family. He told her to leave and not come back, so she went to live at her father's house.

Neeraj and Babli's family were profoundly affected by stigma and discrimination following their father's diagnosis. "We suffered greatly", says Neeraj. "Once people knew my father had leprosy, nobody wanted anything to do with us. My father could only work a little and our income was about 418 rupees ($13NZ) per month."

Stories like these are a constant reminder to us that families are at the heart of our mission. We are determined to reach out to individuals and their families to offer them the support and love they need to live a dignified life.

By educating people about the causes and consequences of leprosy, we can make sure that people affected by the disease are not rejected by their families, and that families are not discriminated against within their communities. We help people understand that leprosy is not a curse from God, (which is an all too common myth), that it can be cured, and that early detection and diagnosis can prevent deformities and long-term disabilities.

We have set up self-help groups in hundreds of communities around the world. These groups are specifically designed to bring leprosy-affected people together so they can rebuild their confidence, be empowered to stand up for their rights, and eventually reintegrate into their families and communities. Self-help groups operate like families - the love, support and acceptance they offer enable people affected by leprosy to flourish.

Of course, you and your family are at the heart of our mission as well- because we wouldn't exist without your support. You are a valued member of our Leprosy Mission family, as are all our supporters, staff and partners around the world. We know that if we continue to work together as a global family, we can eradicate the causes and consequences of leprosy well within our lifetimes.

So this Easter, let's take some time to celebrate the power of family while remembering all the people around the world who need our continued love and support.

Support our work with leprosy-affected people and their families.